Attending a family wedding in India in 1986, Tom Sundher made a discovery that would change the fortunes of his British Columbia lumber company—and Canada’s forest products industry as a whole. 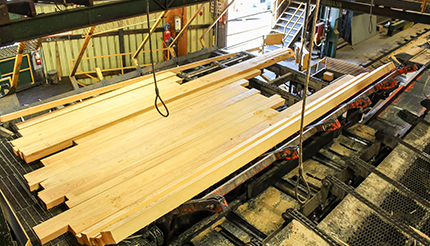 “Wherever I went I saw wood, lots of wood, but no Canadian wood,” he recalls. “Our wood is used all over the world,” I thought, “Why not in India?”

Sundher, founder and owner of the Sundher Group of Companies, which includes three firms that manufacture and market different types of coastal forest products for Canadian and world markets, resolved to do something about that. Today his company does about 10 percent of its $50 million in annual sales of lumber in India. There they are made into door and window frames as well as doors, flooring, panelling and furniture.

“Our market in India has been growing each year,” says Sundher, the company’s president and CEO, noting that the 60 percent of its revenues come from outside of North America. He is an energetic champion of marketing BC lumber across the world and an aggressive proponent of opening new and emerging markets. In those early days, however, exports of Canadian wood to places such as the United States, Japan and Europe were booming, and he couldn’t drum up much enthusiasm for tackling the Indian market.

“We’re spoiled and a little bit lazy,” he explains. “Nobody took any interest.” They said, “We’ve got other things on our files.” 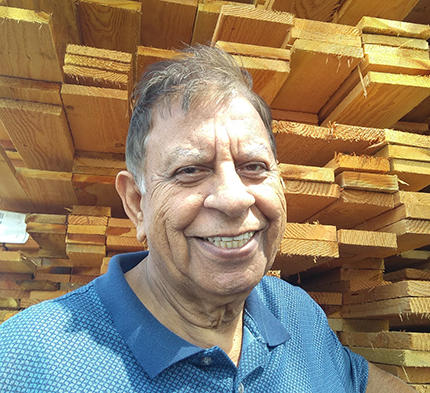 Sundher attended a trade show in India solo in 1998 as an agent of MacMillan Bloedel, the former Canadian forestry company, and with the support of Viney Gupta, a member of the Canadian Trade Commissioner Service (TCS) in New Delhi. “Viney helped set up a booth with some examples of BC wood. It was simple, believe me,” he says, noting that Gupta continued to support his road shows to promote Canadian wood.

Sundher’s efforts grew over time and in 2012 the province created an international branch of its marketing agency, Forestry Innovation Investment Ltd. (FII), which works with industry and the federal government to help maintain, create and diversify markets for BC forest products. The Crown Corporation has identified interior wood finishing products, furnishings, doors, and windows as a sector where BC could concentrate and become active in countries such as India. Today many companies are promoting their lumber products there, says Sundher, although Canada’s market share in that highly competitive market is still less than 1 percent.

“It can’t go anywhere but up,” he says, noting that Canadian lumber is both easier to work with and cost‑competitive. Sundher sees demand from the Indian market growing, as the second biggest country in the world and one of the youngest. India’s supply of hardwoods from its usual suppliers is shrinking and the country is looking for alternative species, while traditional markets for Canada such as Japan, the United States and Europe are also declining, he says.

India is among the world’s five largest markets for wood and wood products, and it represents significant potential for Canada’s forestry and building‑product sector, says Viney Gupta, a trade commissioner who covers the forestry sector for the Canadian Trade Commissioner Service in New Delhi.

By 2024, India will be the world’s most populous country and it will require huge volumes of timber for fulfilling its basic requirements in housing, construction and furniture production, he says. The country is also largely dependent on lumber imports due to a Supreme Court ruling banning tree cutting in many of its forests.

Gupta says that while Canadian lumber sales to India have grown ten‑fold over the last decade, “this still represent less than 1 percent of India’s total lumber imports.” Canadian exports of wood to India in 2017–2018 were valued at $2.4 billion.

“Canada is still a young player in the Indian market for wood and wood products,” Gupta says. There has been progress, for example through BC’s Forestry Innovation Investment (FII), which established an office in Mumbai in 2012. “The Indian TCS team continues to work closely with FII to promote the use of wood species with key local influencers,” he says, noting that there is similar TCS engagement with other provincial partners Ontario Wood and the Quebec Wood Export Bureau.

Northern India continues to be major importer of softwood and some hardwood, Gupta notes, while buyers from the west and south of India prefer coastal species. “India is primarily a hardwood market, where teak is considered to be the ‘gold standard’ for resistance against decay and termites,” he explains. Canada has strong local market potential, with comparable hardwood species from Ontario and Quebec.

He says that BC’s coastal hardwood species of Yellow Cedar, Western Red Cedar and Western Hemlock as well as Douglas Fir are ideal exports to India for uses that require clear knot‑free wood, such as windows, doors and furniture. Softwood species like spruce and pine are also finding a market there. India represents just a small percentage of BC exports, but India’s increasing stability and strong economy make it increasingly attractive.

“India is very much a relationship country,” Fisher notes, suggesting that companies have to be patient and work hard to develop customers in the country, which is projected to face a serious shortfall of wood in the next 16 years. “This could become a major market for us.”

Sundher advises companies like his to “concentrate on what Indians need,” for example lumber for windows, doors and furniture in specific sizes. It’s also important to be on the ground, and to have Indian nationals on staff. His company opened a sales office in Ahmedabad, India, three years ago, and it represents other lumber companies in the country.

The FII supports a Canada wood booth at a major Indian trade shows each year, which Sundher finds gratifying.

“When I started, nobody would even talk about India,” he says, noting that the expanding focus on the country “is good for our Canadian economy and the Canadian lumber industry. There’s room for everybody; the more the merrier.”

Sundher keeps in touch with trade commissioner Viney Gupta, who covers forestry as well as aerospace, defence and security, for assistance in identifying new prospects and for his help on further shaping the business.

“I always run things by Viney, to get his opinion,” he says, noting that he lately has also been relying heavily on FII for most of the day‑to‑day assistance he needs.

Sundher’s two sons are in the business and working hard at developing foreign markets like India. In 2014, the Sundher Group had sales of about half a million dollars there, while in 2018 that figure had risen to $4 million, and he hopes to do $10 million in business in India by 2020.

Exporting lumber to a distant market like India “is not an easy task, you have to be on top of it,” Sundher says, advising companies to selectively pick their customers. Indians meanwhile are “impressed with Canada, with the way we live, the way we deal with people and the way we’re received in the world. And our wood is well accepted.”

He feels that Canadian lumber companies “should be constantly looking for new markets for our products,” especially more finished goods that keep more jobs in Canada. Indeed, his own company has 12 employees but accounts for 100 jobs in Canada, for example in sawmills, drying kilns, shipping and tracking.

He says that Canada’s lumber companies here should be buoyed by their recent successes in India. “But we’ve just begun. It’s not the end of the story; it’s the beginning of the story in my opinion.”